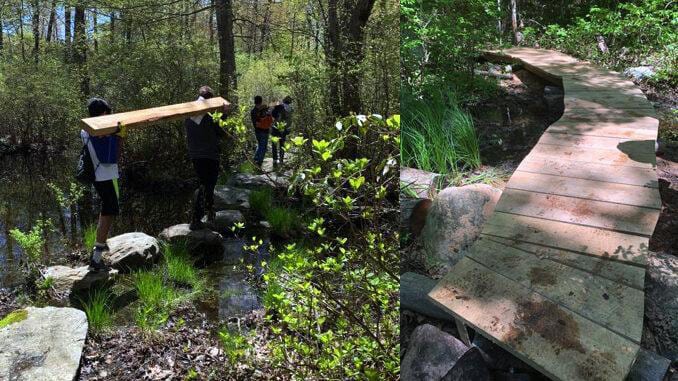 (Photos contributed) - Volunteers had to carry 100-lb gliders about ¾ of a mile to the work site. The 30-foot bridge is about a two-hour hike from Black Rock Forest’s public parking lot and is located between Eagle Cliff and Arthurs Trail.

It was a great project because we [Troop 118] were so involved with Black Rock for hiking and camping out,” Franke said. “It was good to help out a beneficiary that helped out our troop for so many years while I was a part of it.

When trying to pick a project, Franke started the process by sending e-mail to a number of places his troop had been involved with over the years. He heard back from forest manager Matt Brady and agreed to the bridge project. Communication between the two continued as plans were developed to submit for review and approval by his scoutmaster and the Boy Scout Council. Franke received the go-ahead in the early part of 2019 and construction took place in April and May of that year.

One of the benefits of taking on this project, Franke said, was no fund raising had to be completed. All the wood came from a fallen Chestnut Oak in the forest. When Brady received word the project was approved, he took the tree to the mill and cut the lumber to size.

Once the wood was cut, Franke and his volunteers helped transport the lumber to the work site

Considered the most difficult part of the project, Franke estimated the eight logs weighed about 60 lbs and the eight gliders about 100 lbs. Two volunteers had to place towels on their shoulder in order to cushion the gliders. The 32 planks weighed significantly less.

In total, Franke had about 10 friends and family members assisting with the project. Over the course of two months he scheduled seven or eight work days with the longest session being about four to five hours and the shortest around two hours.

The bridge, which measures about 30 feet in length and bends over the stream to stay even with the pre-existing path, is located on the scenic trail in a wet section just west of Eagle Cliff, between Eagle Cliff and Arthurs Trail.

The bridge is accessible from the public parking lot on Reservoir Road and Sybil’s Path. It’s about a 90 to 120 minute hike. Visitors are advised to keep off the entry road which is used for buses and daily deliveries.

Taking the lead role on the project was not unfamiliar territory for Franke, who drew on life experiences to guide him. During his senior year of high school, he was president of the Drama Club, Choral Department, and his A cappella music group.

When the project was complete, Franke had missed the cut-off for the next Eagle ceremony. He was originally scheduled to receive the honor last summer, but the ceremony was postponed because of the pandemic. He was able to join fellow scout, Akhilesh Kootala, for the ceremony over winter break.

“I thought it was really interesting because it was so far removed from when I earned the rank to when we had the ceremony,” he said. “I had over a year to process what being an Eagle Scout is. I had an understanding of how that applies to everyday life rather than just being a high school student. It was interesting to apply those skills I learned in Boy Scouts into the real world and be able to talk about that during my Eagle ceremony.”

During a dance class last semester, one of his peers had a seizure. He and his friend, who is a lifeguard, stepped in to help. Franke was able to use the first aid skills he learned in Boy Scouts.